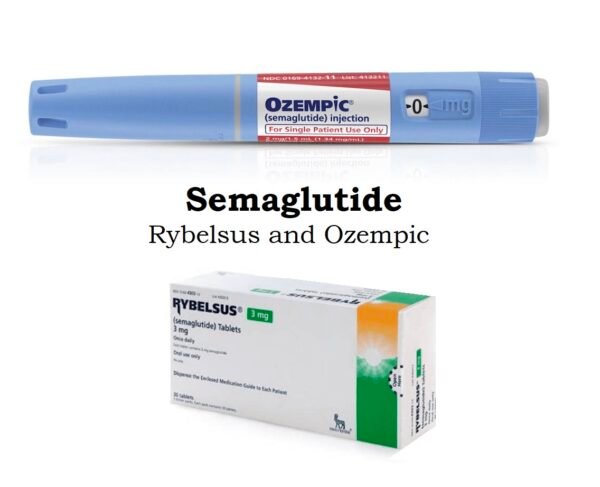 Semaglutide is a GLP-1 agonist that is 94% identical to the natural human GLP-1. It is used in the treatment of patients with Diabetes Mellitus Type 2 who do not achieve their target glycemic control with diet, exercise, and first-line therapy.

It may be used in combination with other antidiabetic medicines like metformin, sulfonylureas, SGLT2 inhibitors, and insulin.

It should not be used as a first-line of therapy in diabetic patients. Furthermore, it should be avoided in patients at risk of pancreatitis, Diabetic Ketoacidosis, and Diabetes Mellitus Type 1.

Both the Oral and injectable Semaglutide have similar efficacy in terms of glycemic control and weight loss.

Rybelsus is taken orally once daily while the injectable Semaglutide (Ozempic injection) is administered subcutaneously once a week.

A recent study titled: "Once-Weekly Semaglutide in Adults with Overweight or Obesity" has been published in NEJM [Ref].

The study evaluated the role of once-weekly semaglutide at a dose of 2.4 mg in obese and overweight individuals.

Participants in the intervention group had a greater improvement in their cardiometabolic risk profile compared to those in the placebo group.

Overall weight reduction at week 68 in patients treated with semaglutide 2.4 mg once weekly was as follows:

P values for all the three comparisons of odds: <0.001

FDA recently approved high-dose injectable Semaglutide for the treatment of Obesity and overweight.

Semaglutide 2.4 mg administered subcutaneously once a week resulted in weight loss ranging from 9% to 16% in individuals with or without diabetes. It is marketed by Novo Nordisk by the brand name of Wegovy.

Recommended for You: Wegovy Comparison with other Weight Loss Drugs

The SUSTAIN-6 trial evaluated the cardiovascular safety of Semaglutide in more than 2700 diabetic patients with established cardiovascular disease in 83% of the patients.

Compared to placebo, there was a significant reduction (26%) in the rates of MACE (cardiovascular death, nonfatal myocardial infarction, or nonfatal stroke) and nephropathy.

However, the rates of retinopathy-related complications were significantly higher including blindness, vitreous hemorrhage, and conditions requiring photocoagulation or the administration of intravitreal agents) [Ref].

Semaglutide does not increase the risk of QTc prolongation.

The SUSTAIN-6 trial found a significant increase in the incidences of diabetic retinopathy-related complications including blindness.

However, the SUSTAIN 1-5 and the Japanese trials did not significantly worsen diabetic retinopathy-related complications [Ref].

A rapid reduction in blood glucose as evidenced by a drop in the glycated hemoglobin levels and the use of Semaglutide in patients with pre-existing diabetic retinopathy were the important factors that resulted in an increase in the retinopathy complications.

The effect of Semaglutide on diabetic retinopathy is similar to bariatric surgery, intensified insulin, and pregnancy.

All these conditions have been associated with worsening diabetic retinopathy as a result of better glycemic control.

The emerging role of Semaglutide in NASH and Fatty liver (NAFLD):

Fatty liver and NASH (non-alcoholic steatohepatitis) is a common cause of liver failure in the west.

NAFLD and NASH are closely linked to insulin resistance, obesity, and diabetes.

It is characterized by fat deposition and inflammation resulting in hepatocyte damage ultimately resulting in fibrosis, cirrhosis, and hepatocellular carcinoma.

Semaglutide once-weekly subcutaneous injection was found to reduce ALT levels in 46% of the patients.

Liraglutide, like Semaglutide, has also been found effective in the treatment of NAFLD and NASH.

The SUSTAIN 7 trial compared once-weekly Dulaglutide and Once weekly Semaglutide.

Once Weekly Semaglutide was found to be superior at both low and high doses compared to dulaglutide in terms of glycemic control and weight loss.

Injectable and Oral Semaglutide Vs Liraglutide:

How to switch from SubQ  to Oral Semaglutide and Vice Versa:

Patients on oral Semaglutide 14 mg may be switched to 0.5 mg SubQ administered weekly that is initiated one day after the last oral dose.

Patients on injectable 0.5 mg Once-weekly Semaglutide may be switched to 7 mg or 14 mg oral Semaglutide approximately one week after the last dose of Injectable Semaglutide.

It is not recommended for use in children

Adjustment in the dose is not necessary in patients with kidney disease.

Adjustment in the dose is not necessary in patients with liver disease.

Less Common Side Effects of Semaglutide Include:

Rare Side effects of Semaglutide:

How to administer the Injectable and Oral Semaglutide?

It can be taken as an injectable or oral medicine.

How to use the Oral Semaglutide, (Rybelsus).

Protein-bound: It is primarily bound to albumin and metabolized by proteolytic cleavage.

It has been a bioavailability of 89% and a half-life of approximately one week.

The maximum plasma concentration is reached in approximately 1 to 3 days after one dose.

The steady-state concentration can be reached after 4 to 5 weeks with the injectable formulation.

It is excreted in the urine and feces.

Ozempic (Injection Semaglutide) has been recently marketed by Novo Nordisk in Pakistan.

It is available as one injectable pen device that contains four doses of 0.5 mg Ozempic.

It will cost PKR 19500 per month ( four doses). One can directly buy from Novo helpline at a discounted price of PKR 16000 per month.