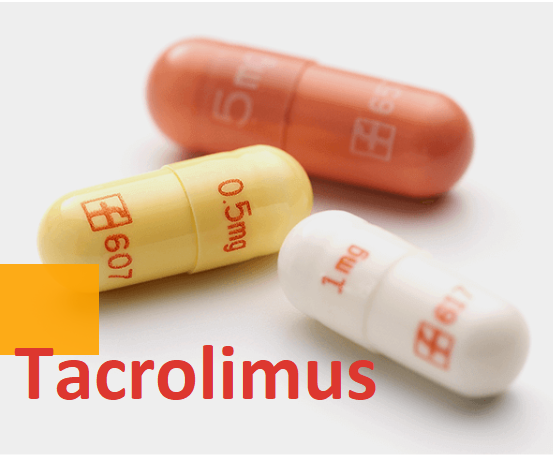 Tacrolimus is a calcineurin inhibitor used as a prophylactic treatment to prevent organ rejection in transplant patients. The extended-release and immediate release formulations should not be used interchangeably, neither should the extended release formulations be used interchangeably because of the variable pharmacokinetic properties Astagrad XL and Evarsus XR in combination with other immunosuppressants are used to prevent rejection in kidney transplant patients Hecoria and Prograf in combination with other immunosuppressants are used to prevent organ rejection in kidney, heart and liver transplants recipients Tacrolimus is also used to treat Refractory rheumatoid arthritis, uveitis, Crohn's disease, myasthenia gravis, in the prevention and treatment of graft vs host disease, intestinal transplant and as maintenance therapy in patients after lung transplantation. [bg_collapse view="button-blue" color="#f7f5f5" icon="arrow" expand_text="Dose in adults" collapse_text="Dose in adults" ]

Note: The immediate-release and extended-release formulations should not be used interchangeably

Sublingual (off-label route): The immediate-release tablets may be administered sublingually. However, the dose may be reduced from half to one-third of the oral dose. Serum trough concentrations should be monitored for dose adjustment.

Immediate-release oral formulation: 0.075 mg/kg/day in 2 divided doses, given every 12 hours to a target trough concentrations. Intravenous dose: 0.01 mg/kg/day as a continuous infusion.

1/5th of the oral dose can be administered intravenously in cases where a switch from oral to the intravenous form is necessary.

It should be used in combination with either azathioprine or mycophenolate mofetil. Immediate-release oral formulation:

With basiliximab induction (prior to reperfusion or within two days of transplant completion):

Preoperative dose (administer within 12 hours prior to reperfusion):

For the Prevention of GVHD: For the Treatment of GVHD:

Usually used in a combination regimen consisting of a corticosteroid and either azathioprine or mycophenolate. Immediate-release oral formulation: Intravenous infusion: 0.01 to 0.05 mg/kg as a continuous IV infusion over 24 hours

Should be used in patients who remain significantly symptomatic despite on pyridostigmine: Immediate-release oral formulation:

Note: The initial postoperative dose of tacrolimus should begin 6 hours after liver and heart transplant and within 24 hours of the kidney transplant. (use of Adjunctive therapy with corticosteroids is recommended early post-transplant period). Intravenous therapy should only be used in patients who can not tolerate oral medications because of the risks of anaphylaxis. Oral therapy may be started 8 - 12 hours after the intravenous infusion has been stopped. [/bg_collapse]   [bg_collapse view="button-blue" color="#faf5f5" icon="arrow" expand_text="Renal dose" collapse_text="Renal dose" ]

Patients with renal disease may require a reduction in the dose because of the risks of tacrolimus-induced nephrotoxicity.

The half-life of tacrolimus is increased in patients with moderate to severe hepatic impairment (serum bilirubin >2 mg/dL or Child-Pugh score ≥10) leading to high blood levels resulting in nephrotoxicity. It can also cause liver toxicity (hepatocellular and cholestatic liver disease) Patients should be monitored closely and the dose should be adjusted based on the drug trough levels. Initiating the patient on a lower dose may be required in such situations. [/bg_collapse]   [bg_collapse view="button-blue" color="#f7f2f2" icon="arrow" expand_text="Contraindications & Warnings" collapse_text="Contraindications & Warnings" ]

Allergy or sensitivity to tacrolimus, castor oils, or any other component in the formulation It should not be used in patients who have a rare genetic disorder - Netherton's syndrome.

Infections (BOXED warning): Hospitalization or death may result from serious bacterial, viral and protozoal infections. Reactivation of latent infections like JC (John Cunningham) virus associated with progressive multifocal leukoencephalopathy, the BK virus which is associated with the polyomavirus-associated nephropathy (PVAN) and the cytomegalovirus (CMV) infection. Malignancies (Boxed warning): Tacrolimus could be associated with skin malignancies and lymphoma. Patients should apply sunscreens and limit prolonged sun exposure Nephrotoxicity: Patients who have been taking a higher dose of tacrolimus or are using concomitant drugs that can cause nephrotoxicity, such as those who have taken a longer-lasting regimen. Neurotoxicity: High doses of tacrolimus can cause tremors, headaches, delirium and seizures in patients. PRES (Posterior Reversible Encephalopathy Syndrome) is a condition that can be caused by an altered mental status, headaches, hypertension, seizures and visual disturbances. This usually improves when blood pressure stabilization is done and the drug dose reduced or discontinued. Pure red cell aplasia: Pure red cell aplasia can occur in patients who have taken mycophenolate or are at high risk for parvovirus b19 infections. Pure red cell aplasia should be diagnosed and treated immediately.

Concerns about dosage form of Tacrolimus:

How to administer Tacrolimus?

Use appropriate precautions like wearing gloves (single) for receiving, handling, administration, and disposal. Wearing double gloves, goggles, face mask, and a protective gown is recommended if the capsules or tablets are manipulated or crushed.

Tacrolimus crosses the placenta and its levels may be higher in the placenta than the maternal serum. Preterm delivery, miscarriage, low birthweight, preterm birth, birth defects (including craniofacial and renal/urogenital abnormalities), renal dysfunction, transient neonatal hypokalemia, and cardiac disease have all been reported in infants of transplant recipients. As pregnancy progresses, Tacrolimus whole-blood concentrations decrease, but concentrations of unbound form rise. It may be preferable to measure unbound concentrations, particularly in females with hypoalbuminemia or anemia. Pregnant females who have had a transplant of a kidney may have a higher risk of developing infection, hypertension, or pre-eclampsia if they are using an immunosuppressant in pregnancy. Both liver transplant recipients of tacrolimus have experienced diabetes and hypertension during pregnancy.

Reference Ranges for Tacrolimus levels in the blood.

Typical whole blood trough concentrations (goals levels may vary and have not been adequately determined):

Whole blood trough concentrations: When administered in combination with everolimus for liver transplant:

Prevention of graft-versus-host disease (off-label use):

Mechanism of Action of Tacrolimus: